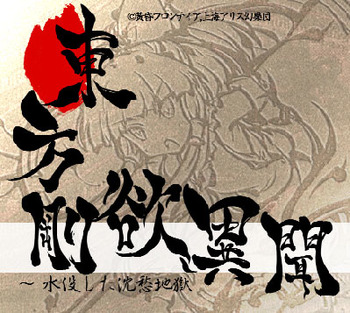 And now, for Something Completely Different.

Touhou Gouyoku Ibun ~ Suibotsushita Chinshuu Jigokutranslation  Strange Tale of Avarice ~ Submerged Hell of Sunken Sorrow is a video game created by Team Shanghai Alice and Twilight Frontier for Windows computers, to be released sometime in the 2020s. It's the 17.5th videogame installment in the Touhou Project franchise.

Mysterious black water with a foul stench has contaminated Gensokyo's water supply. Reimu decides to go underground, and stop the water at its source.

Unlike Twilight Frontier's previous games, and a first for the series, this is an 2D action Boss Game, in a similar style to the story mode battles in the fighting games. The main gimmick of the game is that grazing bullets allows you to turn them into water. Gathering enough water gives you an extra unit of health, that can be used to use your own Spell Cards.