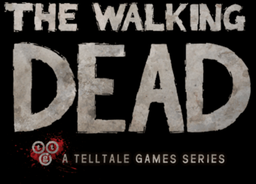 "In the end, the dead always win."
"You're either living or you're not. You ain't little. You ain't a girl, you ain't a boy. You ain't strong or smart. You're alive."
— Chuck, "Long Road Ahead" (Season One).
Advertisement:

The Walking Dead: The Game is an episodic series by Telltale Games that began in 2012. As in Jurassic Park: The Game, you guide your character in an adventure game setting through a relatively linear series of events dotted with minor gameplay puzzles and a few quick time events. Unlike Jurassic Park, it has also gained a reputation as one of the most well-written and emotionally wrenching games of its time due to its Grey-and-Gray Morality, sadistic choices, and absolutely brutal player punches.

At the outset of Season One, Lee Everett is a prisoner handcuffed in the back of a police car traveling down a highway in Georgia when an accident involving a weird shambling man on the road gets him loose. Shortly afterward, he meets a young girl named Clementine, and the pair have to work with others to survive, all while hoping Lee's Dark and Troubled Past doesn't cause everyone to hate him, shun him, or worse, feed him to the zombies.

Season Four, also given a name (The Final Season) released the first episode on August 14, 2018. Now sixteen years old, Clementine is once again the main character and Telltale has said this will be the end of her story, as she tries to keep her adopted son A.J. safe. Unfortunately, on September 21st 2018, Telltale laid off the majority of their employees, including the Walking Dead team, leaving the future of The Final Season uncertain. However, other companies have volunteered to help release the final two episodes so the story could be complete. Fortunately, on October 6 2018 it was announced