Video Game / The Textorcist: The Story of Ray Bibbia 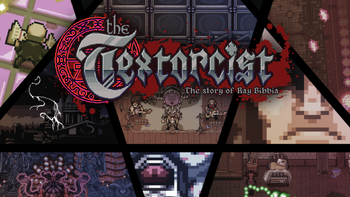 The Textorcist: The Story of Ray Bibbia

, is a mix of a Bullet Hell with a typing game created by independent game developer, Morbidware. The story is about the titular character, Ray Bibbia, a private exorcist who's going to face the threats of a demonic outbreak. But things quickly get more complicated than Ray initially thought as he stumbles into a conspiracy that may involve his past.