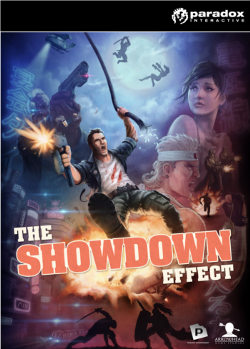 No explosion is too loud and no bullet dodge is impossible. Impale your friend with a broomstick and tell them to “Stick around” as you jetpack off to the next enemy

is a 2.5D multiplayer action game inspired by 80’s and 90’s action movies. Champions from throughout time fight to death for fun, for glory and for awesome.

Brought to you by Arrowhead Game Studios, the people behind Magicka.

You play as one of several heroes. An aging Kung Fu master who specializes in fortune cookie wisdom, an amnesiac Kindergarten teacher trying to regain his identity, A cop 2 days from retirement, a man trying to get his family back, and more in this 2.5D multiplayer action platformer.

The Showdown Effect is currently available for purchase on Steam.