Video Game / The Return to Freddy's 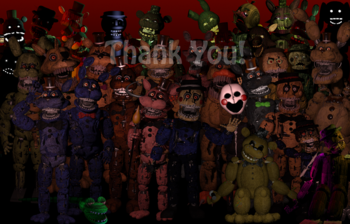 Pictured: most if not all animatronics from the series, including those who would have appeared in 5.
"Lockjaw A.K.A Frank Burt, is the world's first ever animatronic that has been left for spare parts for decades."
— Nightmare Fuel, The Return to Freddy's 4
Advertisement:

The Return to Freddy's series is a Five Nights at Freddy's fangame created by BFPFilms424.

The Return to Freddy's (originally released as Five Nights at Freddy's 3, before Scott Cawthon's official third game released) is the first game in The Return to Freddy's series. The game is known for its stolen assets, cheap mechanics, cheaper difficulty, and bugs. The game would have received a major update with original models, but it is likely cancelled. Released on December 23rd, 2014.

However, the second has more original models and mechanics, along with both a generator plus a music box to wind up. It also takes place in Fredbear's Family Diner, and takes place in 1987. Released on March 25th, 2015.

The third game provided some more Art Evolution with a new mascot as well, Lockjaw, a humanoid Expy of none other the Springtrap, except he has a child inside him instead of an adult. The spirit that used to take control of something familiar... Released in April 2015.

In The Return to Freddy's 4, 15 years after Fazbear Fantasy Land has been demolished, the government has come to a decision to make animatronics legal again. What they don't realize is the terrible mistake they just made... Released in May 2015.

In TRTF 5, you would have played as an investigator in the year 2036, deciding to investigate the cold case involving Fazbear's murders...and that he is "the child of the past". This game was cancelled multiple times during Development Hell, before finally being canned for good in February 2017; then once more being revived by devoted fans and at last being released on March 13th, 2018.

After The Return to Freddy's 5 was canceled for the first time, the lore of the series was written into what the creator calls a "novel"note It's nowhere near novel length, though, called The Dreadful Truth. It can be found here.

The Return to Freddy's: Chapter One is a reboot of the first T Rt F game, planned to come out sometime around 2018. This is gonna be a BIG doozy...

The first four games of the series can be found here

. The fifth game in its current state can be found over here

The game has the following examples