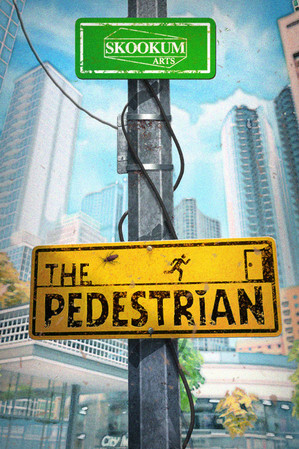 “I can see the signs in my sleep now, always guiding me closer. Will this really work? Have we almost achieved the impossible?”
—Blurb from the game’s Steam store page.

The Pedestrian is a Puzzle Platform Video Game by Skookum Arts.

The game has you playing as an image of a person that can either be a male or female (you can choose between the two images at the start of the game). The game is about said image navigating a series of pictures to reach an exit door. One of the hooks is that the images can be moved around and connected to each other with black lines. This is required in order to be able to solve the puzzles throughout the images.

The game was funded on Kickstarter on February 13th, 2017. It was released on Steam for the PC on January 29th, 2020. A PlayStation 4 and PlayStation 5 version came out in January 2021. The developers have also confirmed

that a Nintendo Switch version is in development, although without a firm release date targeted.

No relation to the West German film of the same name.

The Pedestrian contains examples of: