Video Game / The Legend of Zelda: The Minish Cap 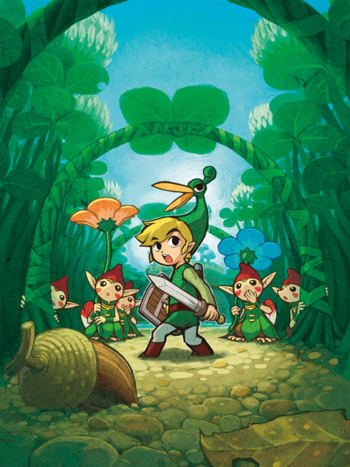 The Hero, the Lilliputians, and the eponymous cap.
"But there is one thing you must know: being Minish-sized is full of dangers! Mere puddles at your normal size are bottomless swamps to the Minish."
— Ezlo

The Minish Cap, released in 2004 in Japan & Europe and 2005 in North America & Australia, is the twelfth game in The Legend of Zelda series and the first completely new one-player Zelda adventure on the Game Boy Advance. Despite the fact that it's one player only, it is a prequel to the Four Swords games, as it goes in depth about the origin of the titular weapon as well as who Vaati is. The game also features a "Kinstone" mechanism, by which Link can collect pieces of medallions and fuse them with NPCs. These Kinstone fusions unlock secrets, ranging from highly important bonus items, to shortcuts, to rooms full of rupees, to simple chests of more Kinstones.

The story begins at a festival celebrating the legendary Picori, who can only be seen by children. At a sword fighting tournament at the festival, the winner is Vaati (later to become the main villain of the Four Swords games), who releases monsters all over the land and turns Zelda to stone, hoping to obtain the "Light Force" held by the royal family. Link meets a talking hat named Ezlo who joins him on a quest to reforge the famous Picori Blade and use it to defeat Vaati. Ezlo uses his power to shrink Link to the size of the Picori (actually called the Minish), which assists him greatly in his quest.

According to Hyrule Historia, this game is second in the overall timeline of the series, preceded only by The Legend of Zelda: Skyward Sword.