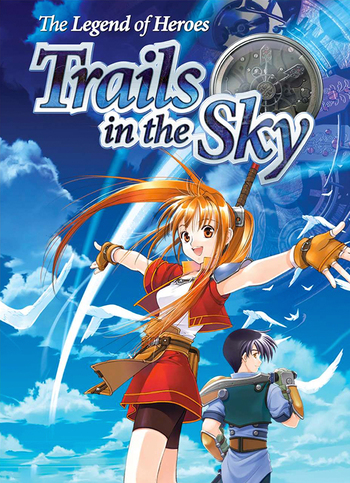 Just a story about a girl, a guy, and the simple adventures they get into...
Advertisement:

The Legend of Heroes: Trails in the Skynote 英雄伝説VI 空の軌跡 (Eiyuu Densetsu VI: Sora no Kiseki or The Legend of Heroes VI in Japan), is a JRPG released by Falcom in the mid-2000s, first on the PC and then on the PSP. It is an entry in Falcom's line of "traditional" turn-based story-heavy JRPGs (as opposed to the action RPGs of the Ys series), and kick-started what has become the company's flagship title as the first entry in the Trails Series.

Trails in the Sky is, in a word, gigantic. It was so large, in fact, that Falcom couldn't practically release it as one game; it was released as two games, with a third game that was more of an epilogue than a third part. Trails in the Sky FC (short for "First Chapter") was released in mid-2004, ending on a massive cliffhanger, with several major questions left unanswered. In spite of the game's modest budget and sprite-based graphics (far behind those standard for the then current wave of PlayStation 2 games), it received praise from critics and players alike for its sprawling cast of characters, depth of Worldbuilding, ambitiously extensive script, and numerous side stories about the lives of its hundreds of non-playable characters.

However, the first chapter was eventually localized and released in March 2011 for the PSP courtesy of XSEED Games (who worked on Falcom's Ys series previously). After several years, XSEED announced in late 2013 that Trails in the Sky SC would be released on PSN and Steam, with the translation done in cooperation with Carpe Fulgur; and after several other travails, SC finally got a release date of October 29, 2015

Beginning in 2015, the games received an Updated Re-release for the Play Station Vita and PlayStation 3 to bring the trilogy in line with later games in the franchise containing enhanced graphics, redrawn character portraits, new animated sequences, a rearranged soundtrack provided by several freelance musicians, full voice acting for the story scenes with the exception of sidequests, with various gameplay additions. Due to the licensing issues involved, these versions of the games are currently only available in Japan and are likely to remain unlocalized.

The series, as a whole, is one arc in the Trails franchise. It was followed up by the Crossbell duology, which consists of Trails from Zero and Trails to Azure. Taking place a few years after the events of the Sky trilogy, these games take place in Crossbell, another country in Zemuria, and stars a new set of protagonists. That arc was then followed up by the The Legend of Heroes: Trails of Cold Steel tetralogy, which also takes place some years after the Liberl arc and features some returning characters from it. Additionally, the series was so popular as to inspire an Intercontinuity Crossover fighting game with Ys, in the style of Marvel vs. Capcom, as well as a more traditional spinoff title, The Legend of Nayuta: Boundless Trails.

Example of:
Something about a Rose