Video Game / The Legend of Heroes: Kuro no Kiseki 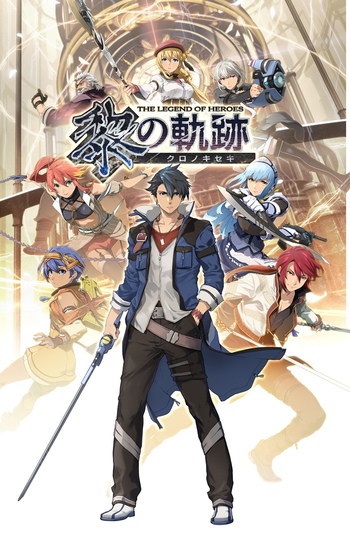 WARNING: Due to the Trails Series being a Long Runner, this page assumes that you have played The Legend of Heroes: Trails into Reverie. The page will likely be filled with unmarked spoilers from the previous games so be careful of Late Arrival Spoilers ahead.

The Legend of Heroes: Kuro no Kisekinote (英雄伝説 黎の軌跡, Eiyuu Densetsu: Kuro no Kiseki, lit. The Legend of Heroes: Trails of Black) is the eleventh game in Nihon Falcom's Trails Series. It marks the fourth arc, as well as the start of the overall series' second half, following the Sky, Zero/Azure, and Cold Steel arcs, taking place a year and a half after the end of Reverie.

The arc begins in the later half of the year S.1208. The Republic of Calvard is experiencing an economic boom from both war reparations paid by the Erebonian Empire after a failed attempt at inciting a world war, and the radical political upheaval led by the country's newest president Roy Gramheart. During this time, an underground profession starts becoming popular due to its nature of accepting work from any client, even criminals: "Spriggan". One such Spriggan is 24-year-old Van Arkride, who owns the Arkride Solutions Office based in the capital Edith's Old Town. One fateful day, on August 27, S.1208, he is visited by Agnes Claudel, a girl attending Aramis High School, who decided to ask for his help in finding her late great-grandfather's stolen Orbment, rather than approaching the police or the Bracer Guild. And from there, what started out as a peculiar job to find a stolen item would take Van and Agnes, and a few other people along the way, on a country-wide adventure that may decide the fate of the Republic and Zemuria as a whole...

The game released in Japan on September 30, 2021 for the PlayStation 4. The PlayStation 5 version would later release on July 28, 2022, and a PC version ported by Clouded Leopard Entertainment in Traditional Chinese and Korean would release the day before. There are two viable ways to play the game in English: one with a fan translation overlay from the Zerofield group, though said group would later take it down around a year after release following a C&D from NIS America on September 1, 2022, alongside all their translations for the Crossbell games and Reverie, and with said release of the PC port, certain individuals from 4chan took it upon themselves to create an English fan translation patch for said port under the fan title "The Legend of Heroes: Trails Before Dawn".

Kuro, much like Cold Steel, is a massive game-changer for the franchise, due to these factors:

It would be followed up with a sequel titled The Legend of Heroes: Kuro no Kiseki II -CRIMSON SiN-. With the mafia group Armata utterly defeated by the Arkride Solutions Office, Calvard has reentered a state of peace. However, it wouldn't be long until this peace was endangered again. Less than two months after the incident, in February of S.1209, a CID special operations squad in Edith was found gruesomely massacred in cold blood by a crimson armored beast that looked similar to Van's Grendel. Van, enjoying his time apart from his part-timers, is contacted and hired by his old friend Elaine to investigate the massacre and track down the beast. What follows is a series of "nightmares" as Van and his Office find themselves in a slew of events that inch into a great coup d'etat upon Calvard, alongside many tragic events that would befall them and their allies as the mysteries behind the crimson Grendel and Agnes's Genesis devices and its dominion over time deepen. Will Van and his party be able to escape this treacherous Trail, or will they be unable to defy fate itself...?

The sequel was released on September 29, 2022, for both the PlayStation 4 and PlayStation 5. An additional update would later release on October 13, which featured additional Marchen Garten-only playable characters, an expansion of the Marchen Garten, and an epilogue-like story update connected to said game mode to finally end the Kuro II story.

the first game can

The Legend of Heroes: Kuro no Kiseki provides examples of: