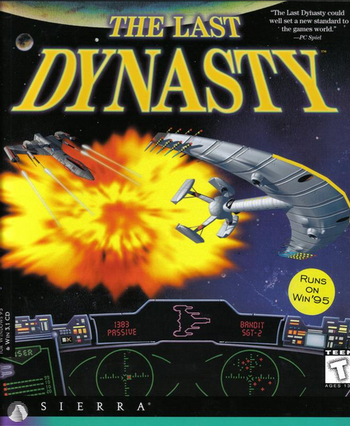 The Last Dynasty is a first-person perspective game combining action, adventure, and simulation elements together. Coktel Vision developed this game and Sierra On-Line, Inc. published it. The game was released in 1995.

The Last Dynasty is a hybrid game that casts the player in the role of the space pilot Mel Raauq. The pilot receives the mission of a lifetime: he has to to locate and eventually destroy Lord Iron, whose minions are out in space in at attempt to subdue other inhabitants of the galaxy.

The gameplay is divided into two phases: space combat simulator in the vein of Wing Commander, and first-person puzzle-solving adventure. The player can pilot many types of spacecraft, such as fighters and cargo vessels, and engage enemy ships in battle using four main weapon types: lasers, remote-controlled missiles, rockets, and aft mines.

During the adventure phase, the player explores the environment in a Myst-style fashion, collecting items and solving puzzles. Full-motion video sequences are used to advance the plot.