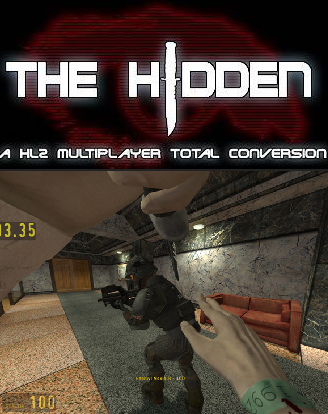 The Hidden player about to shank an unsuspecting IRIS grunt.
The Infinitum Research Intercept Squad, also known as IRIS, is a well-trained, fully armed, and coordinated unit specifically designed to capture or kill escaped experiments.

Their current mission is to hunt and kill Subject 617, a genetically modified individual who has been given Super Strength, Super Speed, and the ability (and need) to feed off human corpses to heal.

Oh. And he's invisible. They call him "The Hidden" nowadays.

The Hidden: Source is a horror-themed multiplayer First-Person Shooter based on the Source engine. Everyone plays on one team (IRIS), but every round, one player is chosen at random to be the Hidden. The Hidden runs faster and jumps higher than any of the IRIS players, he can grab onto walls, he can see enemies through walls, and - this is important - he's invisible. On the downside (for him), there's only one of him, and a whole lot of IRIS members; also, he only gets a knife, while IRIS is armed with guns. The Hidden wins by killing all of IRIS before time runs out. IRIS wins by killing the Hidden. Of course, points don't really matter because the teams are pretty much random, so the goal is really just to piss yourself in fear.

The game began life as a Half-Life modification, but this version was never publicly released and was only played by the author's friends at university. It was remade for the Source engine by those same friends. The game was also a finalist for "Best Mod - Half-Life 2" at the 2006 Independent Games Festival (see here

Highly recommended, though not for the faint of heart. If you've got Half-Life 2, Team Fortress 2 or about any Valve game and Steam,note Protip: if you don't have any Source games on Steam, open Steam, go to your Library, click "Games" (next to the Search bar), click Tools (near the bottom) and click Source SDK Base 2007. Installing this will install all the resources needed for most Source games and mods, which should include The Hidden. it can downloaded for free here.

Not to be confused with the B-Movie where Claudia Christian played a stripper (and some other stuff involving aliens or something).

The Hidden provides examples of: