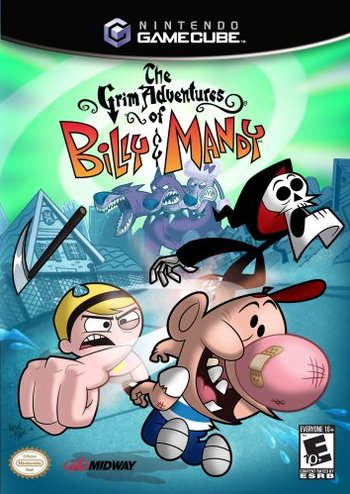 The Grim Adventures of Billy & Mandy received a video game adaptation in 2006 for the Nintendo GameCube, the Wii, the PlayStation 2, and the Game Boy Advance.
Advertisement:

The game is a beat-'em-up style Fighting Game where Grim, Billy, and Mandy find that everyone is starting to fight each other after being corrupted by Mojo Balls that were supposed to be in Grim's trunk. It's up to the trio to beat up every opponent they face and to find out who released the Mojo Balls from Grim's trunk.

The video game contains examples of the following tropes:

Alternative Title(s): The Grim Adventures Of Billy And Mandy