Video Game / The Future Of Gaming 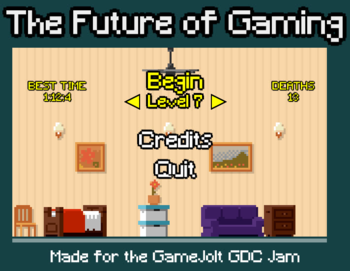 The Future Of Gaming is a video game created by Diptoman for Game Jolt in 2016. It's a platformer in which you control a nameless man with a VR device. You must dodge saws in the VR world, which scrolls vertically and horizontally, and get to the goal there, while avoiding dangerous furniture in RL, which only scrolls horizontally. Switching from VR to RL is performed by holding X.