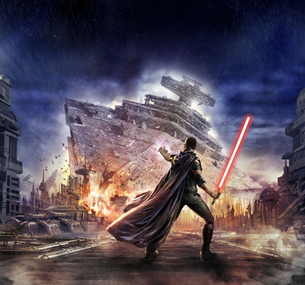 "The Force gives me all I need."
"With the Force as his ally, he did battle with the Dark Lord. And he showed the measure of a true Jedi at a place called 'The Death Star', where hope for the Galaxy was reborn. May all who struggle against tyranny hold his memory in their hearts."
—Epitaph of the Unknown Jedi
Advertisement:

Both center around the secret apprentice of Darth Vader, codenamed Starkiller in the place of a real name, who uses his incredible powers of the Force to battle the enemies of the Empire. However, alongside his droid PROXY, pilot Juno Eclipse, and the Jedi Master General Rahm Kota, Starkiller begins to break off from Vader and fight for his own sake.

They're both something like a Tech Demo Game, being among the first games to use Digital Molecular Matter (a physics engine that makes environmental destruction, such as bending metal and tearing plant matter, much more detailed than anything seen before) and Euphoria AI coding (which determines enemy behavior in a much more realistic fashion — stormtroopers grabbing hold of each other or the environment when lifted by the Force, for example.)

Downloadable Content packs each entitled the Ultimate Sith Edition add What If? stories to both games based on their Dark Side endings and allow the player to battle through the settings of first three Star Wars films as Starkiller and fight characters like Obi-Wan Kenobi, Luke Skywalker, and Princess Leia.

The games were also the center of a multimedia project à la Shadows of the Empire, covering a wide range of media including Comic Books, a novel (by Sean Williams), action figures and a Role-Playing Game, basically all the side-material that would be released surrounding a movie without actually making the movie; the difference here is that this time, the video game was the centerpiece.

That Other Wiki has more information

A Nintendo Switch port, based on the Wii version of the first game, released on April 20, 2022.