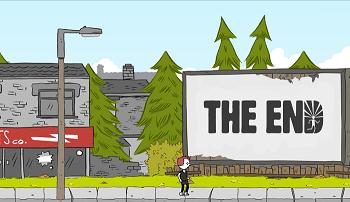 Who are you?
Advertisement:

starts out with you—or your avatar—walking down a peaceful suburban street underneath cheerful blue skies. As you keep going, a faint rumbling noise gets louder and louder. Suddenly you look up to see a massive fireball hurtling through the sky toward you...

Then it gets weird.

The game is part platformer, part card game, and all Mind Screw—there are death traps, switches and spiky plates, bouncing balls and giant hairy monsters, and even links to Facebook.

The website was registered in 2011, but the game became fully playable there sometime around 2012. Sometime in 2017, it went offline, and now appears to be completely unplayable anywhere else.