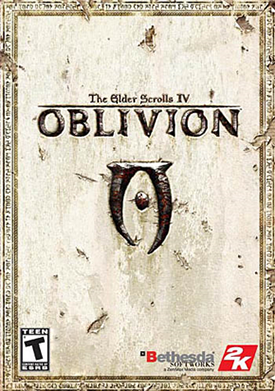 Find him, and close shut the jaws of Oblivion.
I was born 87 years ago. For 65 years I've ruled as Tamriel's emperor, but for all these years, I've never been the ruler of my own dreams.
I have seen the gates of Oblivion, beyond which no waking eyes may see. Behold! In darkness, a doom sweeps the land.
This is the 27th of Last Seed, the Year of Akatosh 433. These are the closing days of the Third Era... and the final hours of my life.
— Emperor Uriel Septim VII
Advertisement:

The game boasts a huge open world with sixteen square miles of terrain to explore, hundreds of dungeons, eight cities filled with Non Player Characters that have their own daily routine and enough quests to fill hundreds of hours of play time. Notably, these NPC routines could be disrupted by the player's activity; Bethesda's new and proprietary 'Radiant AI' would attempt to simulate a realistic response to those actions. The AI for the most part is not scripted, with Non Player Characters merely having a list of general goals to achieve with degrees of priority. Remove all of the food from an NPC's house? When it's time to eat, they may then go out to the market in search of more food. It was... not without its teething problems as a system, with the AI often deciding to do very bizarre things to accomplish its goals.