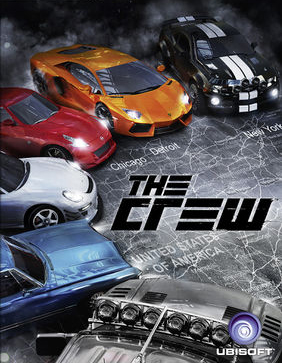 Never Drive Alone
The Crew is a racing MMO developed by Ivory Tower with additional work by Ubisoft Reflections for PlayStation 4, Xbox One, and Microsoft Windows, with an Xbox 360 port developed by Asobo Studio with assistance from Ubisoft Shanghai and the main developers. If some of those studios' names haven't tipped you off already, all versions are published by Ubisoft. The game was released worldwide on December 2, 2014 to mixed reviews.
Advertisement:

Taking place on the continental United States, players play as Alex Taylor (Troy Baker), an aspiring street racer from Detroit who wishes to join the ranks of the 5-10, a racing crew formed by his brother Dayton. After Dayton gets betrayed and murdered by a fellow racer by the name of Dennis "Shiv" Jefferson (Jason Spisak), Alex gets framed for the crime by corrupt FBI Special Agent Bill Coburn (D.C. Douglas). After spending five years in prison, another FBI agent named Zoe Winters (Amy Rosoff) frees him to use him as an undercover agent, sending Alex back into the 5-10 to infiltrate the organization and bring the two men responsible for Dayton's murder and Alex's subsequent false imprisonment to justice.

The game* except the Xbox 360 version received an expansion called Wild Run on November 17, 2015. Focusing on a multiplayer racing festival held throughout the United States called The Summit, with its primary hub located at Bonneville Salt Flats, it expanded on off-road racing across the United States and introduced motorcycles to the game, as well as dragsters, drift cars, and monster trucks. There was also a massive graphical overhaul made available to everyone upon its release. A second expansion, Calling All Units, was released on November 29, 2016, allowing players to play as the cops with a variety of weapons such as EMPs. Since Alex Taylor is a street racer and it wouldn't make sense for him to be a cop, players instead play as new recruit Clara Washington when they are in police cars. After Calling All Units was released, Wild Run was delisted and it is now included with the second expansion as a bonus. Those who purchased Wild Run before its delisting got free Crew Credits (the game's premium currency) for their troubles.

The base Xbox One version of the game was free for Xbox Live Gold members from June 16 to July 15, 2016 as part of the platform's "Games with Gold" program. The Windows version of the game followed suit on Ubisoft Club (formerly uPlay) from September 14 to around mid-October.

A sequel called The Crew 2 was released in 2018, adding boats and planes to the gameplay and featuring a redesigned United States compared to the first game.

Not to be confused with the short-lived comic series or the comedy film.

The Crew contains examples of the following tropes: