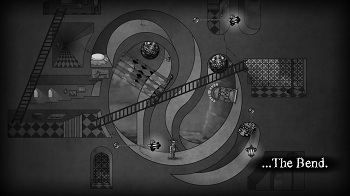 Protip: Abandon all notions of "down."
Advertisement:

What If? Sir Isaac Newton and M. C. Escher were contemporaries, friends, and collaborators on a new kind of spacial mathematics?

If you now have a vision in your head of weird subjective gravity moving over figures that can't exist in three dimensions, you've got a good idea of what this indie Puzzle Platformer is like.

As an Escher look-alike (hereafter referred to as The Professor), you will navigate the strange geometry and curious puzzles of 48 black and white levels that represent fragments of the Professor's house, and his memories of them.

Designed by Ty Taylor and illustrated by Mario Castañeda.

Due to the Story Bread Crumbs nature of the game's plot, practically anything written about it is a spoiler.