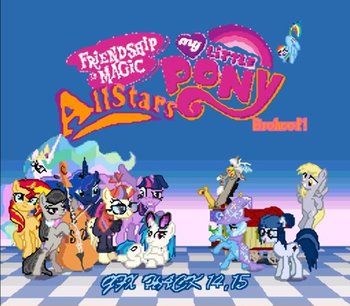 Note: The only times you'll ever see Rainbow Dash or Discord in this game.
Advertisement:

A Game Mod based on Super Mario All-Stars by Botchos, replacing characters from the Super Mario Bros. franchise with ones from My Little Pony: Friendship Is Magic.

Since it's based on a game compilation, it comes with four games, each with their own Excuse Plot:

Every example in their respective game pages applies to these games. Any unique and specific ones go on this page.

This fangame contains examples of: