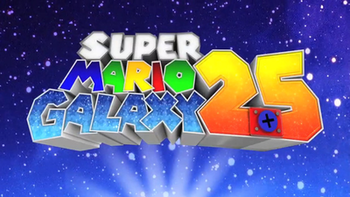 Super Mario Galaxy 2.5 is a mod for Super Mario Galaxy 2, created with the team's Level Editor, Anarchy in the Galaxy. Its main purpose is to use SMG2's engine to produce a new game, which includes new levels, new gameplay mechanics, and new features. The team's previous main site can be found here.

The Project's current official site, however, can be found here.

In addition, the team currently uses a new editor called "Whitehole" instead of Anarchy in the Galaxy.

A trailer and demo

have been released. However the team has confirmed that the galaxy featured in the demo, Planet Plains, will NOT be in the final game (as all galaxies have been decided). In January 2014, the game was canceled.

Tropes present in this hack: