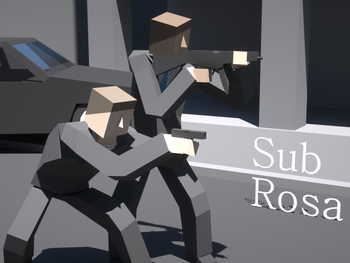 It's the 1980's. Corporate espionage is at an all time high. Information is currency, and shady corporations will do anything to obtain it. That's where you come in- you're an average corporate spy, keen on rising up the ladder of success and earning cold, hard, cash. Through cooperation with your teammates, you must complete your missions by any means necessary.

Sub Rosa is a multiplayer First-Person Shooter for PC with a corporate espionage flavor. The main gameplay hook is that there are three teams (each representing a different corporation) who are each given a mission at the beginning of a round. They are then allowed to complete this mission any way they see fit, with the main catch that it's possible for all three teams to win depending on the scenario. Generally, the goal is collect a disk hidden somewhere on the map. It's either out in the game world as a dead drop, being carted around by an A.I driver, or, most likely, one of the other teams already has it. By using a phone, a player can call a member of the other team and negotiate a drop point for exchanging the goods. Any number of elements can influence these deals, however. Betrayals, ambushes, secret deals and more are all possible and rewarded through clever planning.

Other unique gameplay mechanics include:

The original version of Sub Rosa was created during a 7 Day FPS Game Jam in 2012. It entered Steam Early Access later that year, and remains in development as of 2019. Due to a range of issues, the game has become unlisted from normal searches on Steam, and can only be found through a direct link here.

No relation to the American metal band.