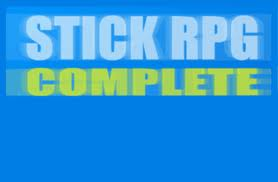 is a game created by XGen Studios. It is a game revolving around a man who one day wakes up in the 2nd dimension. You play as the character of your naming, and Get various jobs at McSticks and New Lines Incorporated. You can buy various new houses and accessories for said houses. You can interact with a few other stick figures, and even deal drugs.There was a sequel, Stick RPG 2

, which takes place in the 2nd and a half dimension, with a more defined plot of finding 4d objects to get back to the 3rd dimension.
Tropes specific to Stick RPG go here: