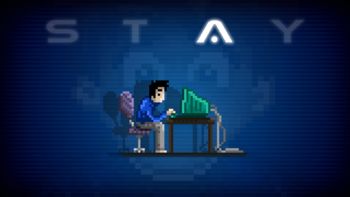 "What would you do if a stranger's fate rested in your fingertips? And how would you cope if every second could be the difference between life and death?"
Advertisement:

STAY is an indie thriller game published by developer PQube on May 16, 2018. It begins with a man named Quinn being abducted and waking up in a room with a computer. He opens a chat program, only to find he's talking to you...

The game's main gimmick is playtime. Every minute you spend offline in real life affects Quinn and puts him more on edge. Leave him alone for too long, PQube warns, and there could be consequences.

Not related to the film or fanfic of the same name. It can be found on Steam here,

and is also available on Xbox One, Playstation 4, Nintendo Switch, and the iOS App Store.

STAY is a very ambiguous game by nature: playing or watching a walkthrough first is highly recommended.