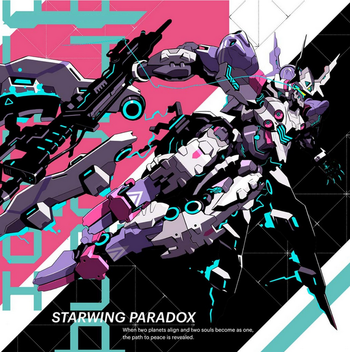 When the planets align and two souls become as one, the path to peace is revealed.

Starwing Paradox is an Arcade Game made by a collaboration of Square Enix and Sunrise, featuring mecha combat in an MMO environment with up to 8v8 combat. Released in November 2018, the game has received an enormous following since its debut.

The game takes place on another planet far away from Earth called the Meguriboshi. Its unique feature, besides being away from any star, is its functions comparable to a living organism. As the living planet travels across the stars, it breathes out a powerful energy source known as Hoshinochi ("star blood" in Japanese), which two great powers have battled over for an unknown period of time. Very recently came the introduction of a Humongous Mecha known as the Air-Real, which can be piloted even by from another world. But those with superior aptitude can unlock their true power, and for that reason, the planet is en route to the world that’s most abundant of these pilots: Earth.

The gameplay aspect is your typical MMO setup. Two teams start at opposing bases and capture neutral objectives known as Points/Ports. Once three out of five are under a team's control, they can enter the field of the opposing team's base and attack the core. Of course, besides enemy players, they also have to get by armies of Mecha-Mooks, defense towers, and even large battleships called Air-Grandes.

Although the MMO gameplay is an important aspect, with players using a touch screen to enter their data, which allows them to combat other players all over. But the most appealing part is the overall design of the console, combining aircraft simulation features to make the seat move like an actual mecha.