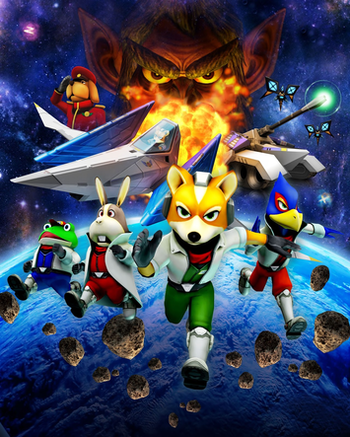 The lylat wars has begun.
"We need your help, Star Fox! Andross has declared war! He's invaded the Lylat system and is trying to take over Corneria! Our army alone can't do the job! Hurry, Star Fox!"
— General Pepper in the intro
Advertisement:

As before, the story begins with Andross, a brilliant but immoral scientist whose extreme experiments gravely threaten Corneria, the fourth planet of the Lylat system. General Pepper of the Corneria Defense Force has him exiled to the frontier planet Venom. Five years later, Pepper notices strange activity coming from the supposedly barren world. The Star Fox team, consisting of James McCloud, Peppy Hare, and Pigma Dengar are hired to investigate. Unknown to the rest of the team, Pigma had been paid off by Andross to stifle their efforts: the moment they arrive, he opens fire and shoots down James and Peppy, who are captured by Andross' forces. Peppy manages to escape from Venom, but James is presumed dead. Following the ordeal on Venom, Peppy flies to Papetoon, and informs James' son Fox McCloud about his father's fate.