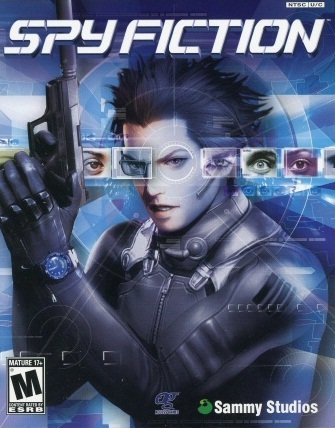 "Back in the hole!"
Advertisement:

Spy Fiction is a stealth-action game developed by Access Games in 2003 for the PlayStation 2. The game was directed by Swery65.

Set in an undisclosed year, the fictional SEA (Special Execution Agency) send out three operatives from their Phantom Unit to Castle Wolfgang in Austria, where the terrorist group, Enigma, is utilizing their bio-weapon "Lahder". The trio, Bishop, Sheila and Nicklaus, successfully enter the castle but Nicklaus is captured, leaving Bishop and Sheila to rescue him (the player can chose to play as either of them).

After a meeting with the guards and the head of Enigma, Nicklaus is left to die and has a flashback to two months ago - when the game starts properly. The player character is in a covert operation into a pharmaceutical company suspected of developing biochemical weapons called NanoTechDyne Inc.

A game made in the style and a homage to the old espionage stories of old, giving the player the ability to disguise themselves as any character in the game.

The reason why nobody has heard of this game was due to the absence of any promotional advertisement before the game was released. The reviews were mixed, either complimenting the story-telling or arguing that it was weak. The only thing reviewers agreed on that it was bold and unique. However, the western version of the game's script was rewritten and redubbed, despite the fact that the Japanese version already had English voice acting. Consequentially, the plot points and themes in the western version are muddled, as explained by this analysis.

If you'd like to see for yourself what it was like, check out Supergreatfriend's Let's Play of it (the western version) here.