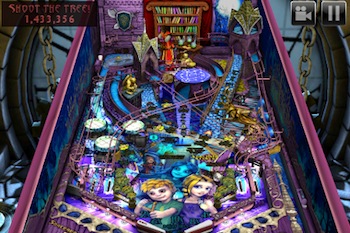 Sorcerer's Lair is a Digital Pinball Table by Zen Studios for their Zen Pinball/Pinball FX games, and one of their original tables that isn't based on an existing property.

In it, you play as a brother and sister who decide to curiously venture into the spooky mansion outside of their town. However, the owner within, the titular Sorcerer, is not pleased with them invading his home. His goal now is to either cast them out, or if they refuse to do so, turn them into monsters to join the other denizens of the property. Luckily for the pair, they're aided by a friendly ghost named Whisper who wishes to help them through the mansion.

The goal of the game is to gather the obsidians (done by completing the modes) and do battle against the Sorcerer himself.

The game is free on most platforms to play as a way to prompt players to buy the Studio's other pinball tables. Public reception to Sorcerer's Lair has been mostly positive, with the strongest points being clear and concise objectives and many available modes. Uniquely among Zen's designs, Sorcerer's Lair has also gained a substantial player base among fans of Physical Pinball Tables, no doubt because Sorcerer's Lair is the closest in Zen's library to a real-life pinball machine.

Sorcerer's Lair has the following tropes.