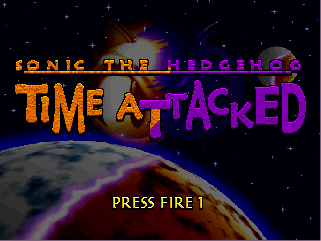 Our hero is running out of time.

From the depths of his deep, dark lair, Dr. Robotnik puts the final touches on his newest creation: A time machine. Taking the device for a test drive, the mad scientist arrives in Slide City in the recent past and manages to off both Sonic and Tails. Back in the present day, Sonic notices that he's slowly fading away and, seeing Robotnik warp into view, figures that the tubby doctor has something to do with his predicament. Sonic must pursue his target across several technicolor locales and find a way to reverse his condition before he disappears entirely.

Released in 2003 by Jamie Bailey and a large swath of Sonic fanbase using Multimedia Fusion, Sonic The Hedgehog: Time Attacked is a PC fangame inspired by a certain blue erinaceinae. In spite being over ten years old, the game is still impressive, thanks in part to its colorful graphics and innovative gameplay.

Sonic controls as you'd expect him to: Primary Fire makes him jump, Secondary Fire makes him Spin Dash (holding the button makes Sonic stick onto any grinding rails and banisters he happens to land upon), and the arrow keys make him move about. To progress the story, Sonic must reach the end of acts and defeat bosses.

What distinguishes Time Attacked from the competition are the extra objectives to be completed in most stages. There are hidden five coins to find in most acts, some of which are deviously concealed. There is also the unique linking system: Each time you collect a Ring, crack open a Monitor, bust a Badnik or smash up barriers, Sonic builds up one link (which is indicated in the HUD). These links can be stacked onto each other, with the ultimate goal of accumulating 100 links in most levels. However, failing to perform any action that grants you a link for more than a little while resets your link counter to zero, so you'd best be on your hedgehog feet. Collecting coins and links unlocks a plethora of extras.

Give this blast from the past a whirl

Tropes existing in all parts of the space-time continuum