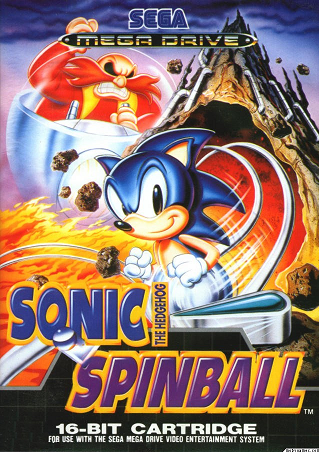 It's Sonic! It's pinball! It's spinball!
Advertisement:

Sonic Spinball, sometimes called Sonic the Hedgehog Spinball, is a pinball game spinoff (no pun intended) of Sonic the Hedgehog. It was originally released for the Sega Genesis/Mega Drive in 1993 as a hold-over for Sonic the Hedgehog 3, along with a Game Gear (and Sega Master System in Europe) version. Notably, this game was not produced by Sonic Team but by the U.S.-based Sega Technical Institute, the same team who developed games such as Sonic the Hedgehog 2, Kid Chameleon, Comix Zone and The Ooze.

The plot involves Sonic and Tails on a mission to stop Dr. Robotnik's Veg-O-Fortress, a Volcano Lair built on Mt. Mobius which is turning animals into robots on an industrial scale. Per usual, Tails' plane is shot down, and Sonic is forced to go in solo.

Its gameplay is derived from the requisite pinball-themed level found in most Sonic games. There are four levels to the game, each reminiscent of giant multi-tiered pinball tables, with Sonic as the ball. The standard platforming action used in most Sonic games is severely- limited here, as the blue hedgehog's movement is mainly controlled by flippers. Sonic only stands upright when on a flat surface, although the player can still use his jump ability and Spin Dash to reach some areas in a hurry. In each level, Sonic must collect all of the Chaos Emeralds, which will give him access to the Boss Room.

Incidentally, this is the closest fans of Sonic the Hedgehog (SatAM) ever got to a licensed game based on the series: it has the cartoon's characteristic Darker and Edgier tone, and explicitly animated roboticization directly modeled on the method Robotnik used in the cartoon.

In the Bonus Stages, Princess Sally and several other Freedom Fighters make cameo appearances alongside, oddly enough, Scratch, from the Lighter and Softer Adventures of Sonic the Hedgehog. This makes it one of only two Sonic games to feature any characters from an animated adaptation, the other being Dr. Robotnik's Mean Bean Machine which explicitly follows the canon of Adventures.

Not to be confused with the roller coaster at Alton Towers that operated as Sonic Spinball from 2010 to 2016, Spinball Whizzer.