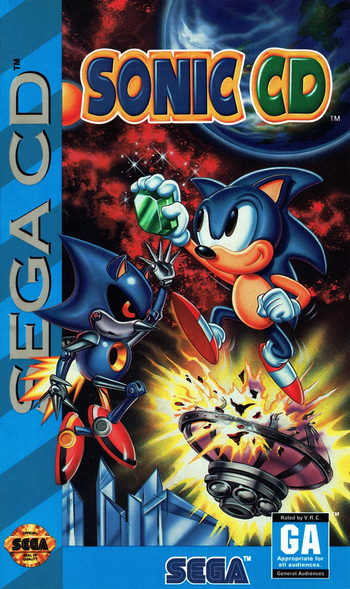 ♫ Trouble keeps you running faster,
Save the planet from disaster! ♫
"To live a life of power, you must have faith that what you believe is right, even if others tell you you're wrong. The first thing you must do to live a life of power is to find courage. You must be ready to reach beyond the boundaries of Time itself. And to do that, all you need is the will to take that first step..."
— Words taken from the Japanese cover of Sonic CD.
Advertisement:

Sonic the Hedgehog CD (also known as Sonic CD) is a Sonic the Hedgehog game released for the Sega CD in 1993 as a direct sequel to the original 1991 game. While it was released after Sonic the Hedgehog 2, the games were developed in tandem, and as a result, have some notable differences between them; the Compilation Rerelease Sonic Origins would later definitively confirm that CD takes place before Sonic 2, helping explain at least a few of the discrepancies. This game introduced two Breakout Characters: Sonic's pink fangirl Amy Rose, and the Evil Knockoff Metal Sonic. The animated opening and ending sequences were done by Studio Junio and Toei Animation.

This time, Sonic explores Little Planet, a tiny world orbiting Sonic's home planet. For one month out of the entire year, it appears over the Never Lake. Little Planet is the home of seven miraculous Time Stones that have been reported to cause wonders, such as preserving the natural world from the passage of time. To witness this phenomenon, Sonic journeys to Never Lake, but is shocked to find Little Planet encased in a metallic floating prison, chained to a mountain carved with the distinct face of Dr. Eggman (also known as Dr. Ivo Robotnik). The scientist seeks to use the Time Stones to rule over time itself.

Meanwhile, Amy — who predicted that Sonic would be arriving at Never Lake by reading Tarot cards — tags along and gets kidnapped by Sonic's robotic doppelgänger, Metal Sonic. It's up to Sonic to save Amy, the future of Little Planet, and the entire timeline.

The gimmick of the game is time travel, by which you can save Little Planet's future: each Round on Little Planet has three Zones, the first two of which have strategically-placed "Past" and "Future" signs. If you hit one of those signs, you'll have a brief window of time to gain enough speed to hurtle Sonic into either the past or the future. By default, the future is always bad: a neglected, decaying ruin left behind after Eggman has conquered and exploited the Zone. You'll want to avoid those if possible — it's possible to hit a Future sign and get sent there by accident!

However, by destroying Eggman's robot teleporters in the past, the future automatically becomes good: all advances in technology will be working to the environment's benefit, and the robots in all three time periods are destroyed (mostly; some will remain in the present). You can also optionally destroy Metal Sonic holograms to bring back the local fauna in each Zone.

Alternatively, you can go to the Special Stages to collect Time Stones; grabbing them all automatically gives every Zone a good future. There is no further need to travel in time, as this will also destroy all of the transporters in the game. The third Zone of each Round is a boss stage, and takes place in the future you created. The bosses are quite different from those in the first two games: the difficulty comes not from fighting the boss, but figuring out how to harm it.

Sonic has two new moves: the Spin Dash — a move carried over from Sonic 2 that lets Sonic use his trademark Rolling Attack without running first — and the "Super Peel Out", a technique which sends him blasting off at even higher speeds, but leaves him vulnerable while revving up. The Spin Dash operates very differently than in subsequent games, again because it was developed in parallel with Sonic 2; it has to be "revved up" for a second before you can go.

A notable aspect of Sonic CD is its soundtracks. The Japanese and European soundtrack, composed by Naofumi Hataya and Masafumi Ogata, takes inspiration from the contemporary House Music and New Jack Swing genres, and makes heavy usage of sampling as a result. This game also featured the Sonic series' first vocal songs, those being "Sonic ~ You Can Do Anything" and "Cosmic Eternity ~ Believe in Yourself" performed by Keiko Utoku and Casey Rankin.

soundtrack, the North American version of the game had an entirely different soundtrack from the Japanese and European versions, composed by the Sega Technical Institute's in-house musicians. Led by Ecco the Dolphin composer Spencer Nilsen, the American soundtrack is more atmospheric and moody than its overseas counterpart, and includes a new vocal theme, "Sonic Boom", performed by Pastiche.

Sonic CD was released in Japan with the original soundtrack on September 23, 1993, then in Europe on October 7, 1993.

North America later got the game with the redone soundtrack on November 19, 1993.

The original version of the game was ported to the PC in 1996, and was later included in the Sonic Gems Collection compilation in 2005 for the PlayStation 2 and Nintendo GameCube. It was excluded from Sonic compilations for several years due to Sega losing the documentation for the Sega CD — the Gems Collection port is based on the PC version.

To address this issue, the game was remade from scratch in 2011, using the Retro Engine developed

by Promoted Fanboy Christian "The Taxman" Whitehead. It was released on Xbox 360 through Xbox Live, PlayStation 3 through the PlayStation Network, PC through Steam, Android and iOS devices, and Windows Phone. Phew! The phone version was announced with the others but not released until November 2012 alongside Windows Phone 8.

The new engine allowed CD to be given true widescreen support, and all aspects of the game run at 60 FPS, including the Special Stages. Both soundtracks are available to be swapped between, with this being the first time the Japanese and European soundtrack was officially available in America (other than its inclusion in Sonic the Screensaver, a late-'90s PC app). Further new content was also added, such as achievements and Tails as a playable character

In May 2021, Sega announced that Sonic CD and the other mainline Genesis Sonic games would be compiled together in Sonic Origins, which was released on June 23, 2022. This version, along with all of the other games in the compilation, runs on the Retro Engine. The original Sega CD version of the game is also one of 50 games included in the Mega Drive Mini 2 microconsole, released in October 2022.