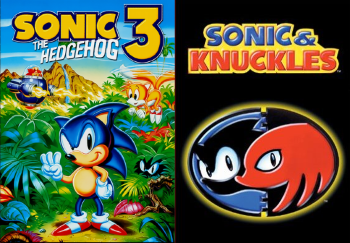 Third time's the charm.
Sonic races through the green fields.
The sun races through a blue sky filled with white clouds.
The ways of his heart are much like the sun. Sonic runs and rests; the sun rises and sets.
Don't give up on the sun. Don't make the sun laugh at you.
— Words taken from Japanese cover of Sonic & Knuckles.
Advertisement:

Sonic 3 & Knuckles is Sega's third 16-bit entry in the Sonic the Hedgehog series, and the follow-up to the wildly-popular Sonic the Hedgehog 2. It was so ambitious that time and hardware constraints forced them to split it into two separate games:

Sonic the Hedgehog 3, originally released on February 2, 1994, covers Sonic's arrival at the Floating Island (later named Angel Island), after the first zone) and his journey to Launch Base Zone. As in Sonic 2, players can control Sonic the Hedgehog, Miles "Tails" Prower, or both. Knuckles the Echidna, an eventual member of the series' Power Trio, made his debut in this game as an antagonist. It was the first Sonic game to offer save files.

The plot picks up after the Genesis/Mega Drive version of Sonic 2. Following the destruction of the Death Egg, Dr. Eggman (a.k.a. Dr. Robotnik) crash lands on the mysterious Floating Island above the sea. The island is able to fly due to its connection with the Master Emerald, a mystical gem of immeasurable power which Eggman intends to steal in order to fuel his space station. When Sonic and Tails arrive to investigate the now seabound landmass, the former is attacked by the island's guardian, Knuckles, whom Eggman has tricked into believing that Sonic and Tails are thieves who are out to steal the Master Emerald. The game ends with Sonic preventing Eggman's Death Egg from launching, which causes it to plummet into a volcano cone.

Sonic & Knuckles, officially released worldwide on October 18, 1994, continues Sonic's adventure after he arrives on Mushroom Hill and up to the final battle against Eggman aboard the Death Egg. As the title suggests, Sonic and Knuckles are the only playable characters. S&K was originally released on October 17 in select U.S. retailers and via the MTV-televised "Rock the Rock" competition (which concluded on Alcatraz Island, of all places), where the first cartridges were given to the winner and runner-up. One of the game' main selling points was its "Lock-On Technology", i.e. a slot on top of the cartridge in which another Genesis cartridge could be inserted. By connecting the Sonic 3 and S&K cartridges in this way, the two could be played as one continuous game: Sonic 3 & Knuckles, a 32-Megabitnote the box claims 34-Megabits, but two of those megabits actually belong

to the unrelated Sonic 2 lock-on feature, which is 26-Megabits game with all three playable characters.

Sonic's campaign culminates in a battle against Knuckles just outside the Master Emerald's altar. When Eggman shows his true colors by stealing the Emerald and electrocuting Knuckles when the latter tries to interfere, the echidna finally realizes the doctor's trickery and helps Sonic chase after the Death Egg before it can leave orbit.

The Knuckles campaign takes place shortly after Sonic's story and features the same levels up to Lava Reef Zone. After that, the player explores an abridged version of Hidden Palace Zone that is devoid of obstacles, which is followed by the final battle against Super Mecha Sonic, an Emerald-enhanced version of Sonic's robotic rival, on Sky Sanctuary Zone. Knuckles can't run as fast or jump as high as Sonic/Tails, but can access new areas by gliding and plowing through walls that the others can't pierce. The villain is one of Eggman's Eggrobos, rather than the Doc himself.

The gameplay represented further Sequel Escalation compared to Sonic 2. The top speeds are even faster, Zones are larger and have a greater variety of terrain, and nearly every Act ends in a boss fight. There is slightly more focus on plot, as well: Knuckles' arc is shown through a number of in-game, dialog-free cutscenes, and each Zone ends with a brief scene of the heroes getting transported to the next region in some fashion.

The game also introduces specialized shields: the Water Shield lets you freely explore underwater sections without drowning and grants Sonic the ability to bounce; the Flame Shield renders you impervious to flames and lava and lets Sonic perform a flying tackle; and the Lightning Shield attracts rings like a magnet and gives Sonic a double jump, as well as protecting you from electricity-based attacks. Item-granting Bonus Stages were added along with the usual Special Stages, and both are awarded in-level as opposed to in-between them. Cast Speciation (first introduced in the previous year's 8-bit title Sonic Chaos) was further developed: Sonic can make use of a brief, midair "Insta-Shield" to deflect hits and extend his reach slightly (useful against badniks that have a shield around them); Tails can fly (by himself or while carrying Sonic) and swim; and Knuckles can glide and attach to, and climb, sheer walls.

S&K also linked with the Sonic 2 cartridge, allowing you to play Knuckles the Echidna in Sonic the Hedgehog 2. The developers attempted to implement a similar feature with Sonic 1, but found that Knuckles' color palette was incompatible with the game's. Instead, combining it with Sonic 1, or the '97 compilation cart Sonic Classics, expands on the Special Stage (Blue Sphere) minigame, with over 100 million variations. Locking on any other Genesis game will generate a unique stage.

For the first time since 2011, Sonic 3 & Knuckles has been re-released in the Compilation Rerelease Sonic Origins, developed by Simon "Stealth" Thomley of Headcannon, who was previously responsible for the rereleases of Sonic 1, Sonic 2, and Sonic CD as well as Sonic Mania. Much like those games, Sonic 3 & Knuckles has been rebuilt in the Retro Engine developed by Christian Whitehead. In addition to upgrades comparable to the other Retro Engine rebuilds, this release is also notable for another reason: due to, to put it lightly, complicated legal issues regarding the game's soundtrack (see the Trivia page for the full details), a few of the music tracks have been replaced with new, Genesis-faithful arrangements of tracks that were originally used in a prototype version of the game and would later be implemented into Sonic & Knuckles Collection, a 1997 PC release of the game. Jun Senoue, who worked on the original game's soundtrack, is responsible for these arrangements.

This would be the last core series Sonic game until 1998's Sonic Adventure, which further explores Angel Island's backstory. It would later get two more sequels in Sonic the Hedgehog 4 (its plot serving as a sequel to the Death Egg saga) and Sonic Mania (unrelated plot-wise, but closer in gameplay and formula, due to taking place in the Classic Sonic Dimension after the Time Eater plot in Sonic Generations).