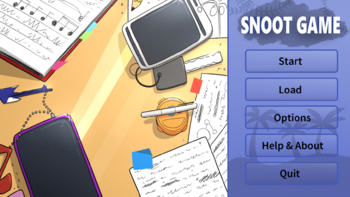 The Pre-historic Romance a million years in MS Paint to tell!
Advertisement:

June 11, 2020: Sony begins a press conference livestream formally announcing the PlayStation 5. During the conference, a trailer for a game called Goodbye Volcano High is shown: an interactive narrative featuring teenage anthropomorphic dinosaurs. Almost immediately and over the next few weeks, the game begins to receive mockery and criticism from all corners of the internet, making fun of the the character designs, animation, and overall poor presentation of the game. As the mockery dies down, the game is largely forgotten about... Except for on 4chan's /v/ board, where their natural contrarianism has kicked in, leading to a full 180 and spurring genuine passion and heated discussion of the game.

Flash forward one year later, and unbeknownst to the board at large, a group of anonymous artists and game developers band together to use the jokes and fanon created by the users of the site to craft their *own* version of Goodbye Volcano High, releasing it nearly a year to the day that the actual game was unveiled.

Snoot Game, developed by Cavemanon Games, is a Visual Novel parody of Goodbye Volcano High, produced in Ren'Py and initially released on June 4, 2021, with the final major patch released on November 27, 2021. You play as Anon, a new student at Volcano High recently transferred from his old school after an unspecified incident occurred. Initially planning on coasting through the remaining six months of the school year being as forgettable and unremarkable as possible, Anon quickly finds himself drawn into the life of Fang, the real game's protagonist, learning to care for them as a friend and seeking to help them with their own life problems, as well as fix his own in the process.