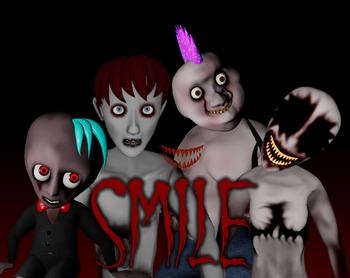 Mental Health is often times overlooked until it becomes a debilitating problem.
Advertisement:

Theodore Caldwell didn't expect a trip to the doctor to land him in his situation. While seeking help for his mental health and addictions, he went to a mysterious fellow by the name of Dr. Blazer, who works for ECCO (The Electro-Convulsive and Cognitive Therapy Organization), who promised him that everything would be routine when something far more sinister is at work.

Either way, now Theodore finds himself stuck in a mysterious place, being pursued by frightening entities that seem to want him dead. Theodore will need a steady hand, quick reflexes, and attention to detail to escape and find out what's going on around him.

Smile is a Science Fiction Psychological Horror Video Game by Ecco Studios. It was released on Steam for PC on February 27th, 2020.