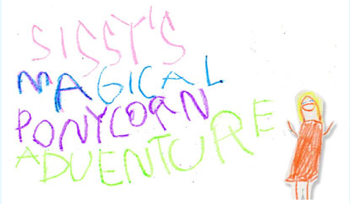 with the help of her father Ryan. Playing as Sissy, a young girl obsessed with ponycorns, you travel through rainbow portals and outwit hammy villains to collect all five of the titular creatures in jars. The crayon graphics and goofy dialogue make for a surprisingly charming game.

Can be played here.