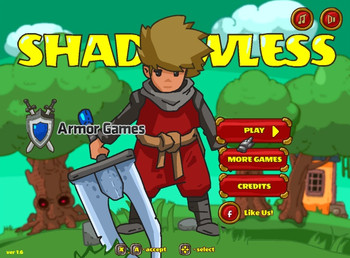 Shadowless is a 2D web-based action platformer with RPG Elements developed by Griman in 2016.
Advertisement:

In this game, players take on the role of a unnamed wanderer who's missing their shadow. He doesn't have much recollection of his past, but has heard that the Queen of Shadows likely has his shadow due to her taking the shadows of her minions. So, our hero embarks on a quest to regain his shadow and learn more about his part. But of course, the journey will not be easy with all of the Queen's minions patrolling the land.

This game can be played for free here