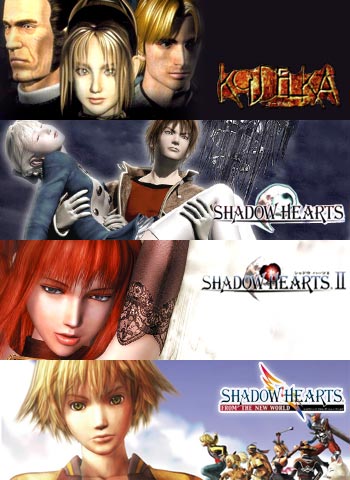 Koudelka, while not a Shadow Hearts game in name, was the first to be released back in 1999, and exists in the same continuity as the Shadow Hearts games. Hiroki Kikuta originally developed it as a radical new take on the RPG genre, but Executive Meddling forced him to change the gameplay from Resident Evil-style action-horror to Final Fantasy-style traditional Turn-Based Combat. The result was a mess (teaching us, among other things, why Survival Horror games should not have Random Encounters), with Kikuta resigning from his CEO position in protest after the game's completion.

Set in Wales in 1898, the game tells the story of Koudelka Iasant, a young Romani girl with supernatural powers who is drawn to the mysterious Nemeton Monastery after experiencing a series of troubling visions. Along with adventurer/thief Edward Plunkett and bishop James O'Flaherty, they must delve into the dark history of the Monastery and stop the malevolent force that permeates its halls.

There exist a number of Japan-only media related to Koudelka: a drama CD that retells key events of the game, a novelization of the game, and a manga originally set as a direct sequel (but now considered in a separate continuity from the Shadow Hearts trilogy).