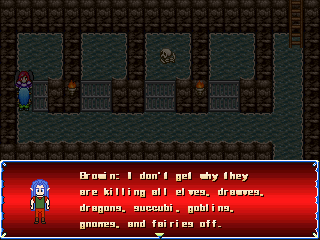 Fantasy races are facing genocide...
You will be open to an exciting and original tale of a confused and lost succubus named Faira. She will meet various friends and foes on her journey to bring peace to the world and perhaps learn about her true identity.
— The game's readme file.

Scelus' Path is an American freeware game made using RPG Maker. It was created by Sean J. Nichols, who published it under the pseudonym of Earalia Nolan.

The game takes place in a world which was created by Voluntes, goddess of creation, and Scelus, goddess of death. Bishalt, king of the humans, has set up an evil religion to keep humanity under his sway and launched a campaign of genocide against all other races. In the midst of this slaughter a succubus named Faira decides to band together the eight races of the world to overthrow Bishalt and end his evil reign. However, Faira eventually finds that she is actually an incarnation of the evil goddess Scelus, sent to the physical world by Voluntes as a chance to redeem herself for her sins. Will Faira carry out her mission to defeat Bishalt, or will she give in to her dark side?

The game can be seen as a Spiritual Successor to Nichols' earlier title, The Last Resurrection. Both games have a succubus as a lead, an organised religion as the main threat, and to an extent similar character designs. However, the turn-based battles of Scelus' Path depart from the game's The Legend of Zelda-influenced predecessor; also, while Last Resurrection had a quasi-historical backdrop, Scelus' Path takes place entirely within a fantasy secondary world.