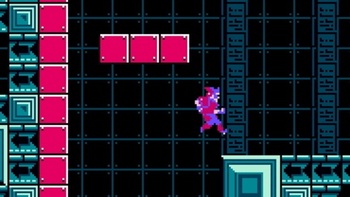 STREEMERZ is a remake of a Action 52 game of the same name for the Nintendo Entertainment System.

The game is about Joe, a member of STREEMERZ, who had sabotaged the V6-15D and has to evacuate Master Y's headquarters.

It borrows heavily in design from both the original, and from Bionic Commando for the NES.

This game was made as part of the Action 52 Owns project. A flash version on Kongregate is available here

. There is also an NES version, handled by Faux Games, to download for free here

and for sale on cartridge here

You can also find the original version in the Action 52 Owns page.