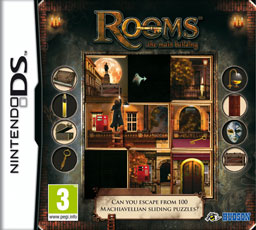 Rooms: The Main Building is an E-Rated Puzzle Game brought to you by Hand Made Game, Hudson Entertainment, and Big Fish Games. It was released for the PC in 2008, and for the Nintendo DS and Wii in 2010.

You play as Mr. X, a man who is terribly bored on his birthday. A present arrives on his doorstep from a mysterious Mr. Book; inside is an unfinished jigsaw puzzle that teleports him to the alternate world of "Rooms". There, he meets Mr. Book (who really is a book) and is told that he must solve the various puzzles of the Rooms mansions if he wants to create an exit to the real world.

Each of the various sliding puzzles are presented as a variety of square rooms laid out on a black background. The player controls Mr. X, who must reach an exit door by entering different rooms and moving them around. As you progress, Mr. X must also make use of ladders, teleporters, subway stations, gunpowder, and other gimmicks in order to reach the exit.