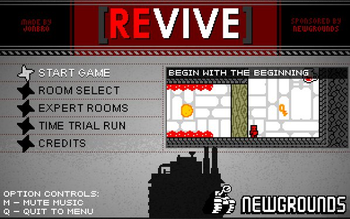 You are Subject 2-Change. You wake up in a lab with the help of the friendly voice of Generic Omnipresent Voice (or GOV, for short). GOV wants you to test a Life Syrup that supposedly has the power to grant eternal life (with a 67% chance of reviving you from death). With no other option, you must go ahead and take the test....
Advertisement:

[REVIVE] is a Puzzle Platformer created by JonBro in Adobe Flash and released in 2013. It is based on his earlier outing [RESPAWN], but unlike the latter, [REVIVE] has a story which gets far deeper as you progress.

It can be found on Newgrounds here