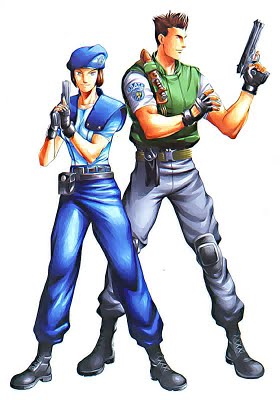 Resident Evil (Bio Hazardnote Later games in the series would spell the title as one word (Biohazard). in Japan) is a horror-themed action-adventure game released for the PlayStation in 1996 and the first entry in the Resident Evil franchise. Shinji Mikami conceived the game when his superiors at Capcom requested an updated version of their horror classic Sweet Home. With graphics and game design inspired by Alone in the Dark, Resident Evil spawned one of Capcom's most iconic franchises, which now includes several video game sequels and spinoffs as well as other media tie-ins. This game also gave us the term "Survival Horror".

The story begins in the fictional American town of Raccoon City in July 1998. Tourism has taken a hit recently thanks to a spate of murders in the Arklay Mountains—each of them cannibalistic in nature. Bravo Team, one-half of Raccoon City's Special Tactics and Rescue Service (S.T.A.R.S.) squad, flies out to investigate the area. When the team makes no radio contact a day after their departure, Alpha Team deploys to find them.

When Alpha Team arrives at the scene, they find a wrecked chopper, a dead pilot, and no one else from Bravo Team, dead or alive. A pack of zombified dogs chase the team members into a nearby mansion. A handful of survivors—team leader Albert Wesker, weapons specialist Barry Burton, and Player Characters Chris Redfield and Jill Valentine—agree to comb the house for stragglers from Bravo Team. Wesker decides it would be a smart idea to split up, and that's when the shit really hits the fan. The mansion's architect, being a fan of spy movies, has enhanced their home security in elaborate ways—but all of the mansion's booby traps don't present nearly the same kind of omnipresent threat as the bio-engineered murder machines shambling down the hallways...

Players choose to control either Chris or Jill, and this choice determines which characters will show up during the campaign: Chris will run across piano-playing medic Rebecca Chambers in his scenario, while Alpha Team's Barry accompanies Jill. Jill also comes equipped with a lockpick, which saves you the trouble of juggling keys.note She has less health, though. The game limits how much ammunition and how many healing items players will find during the game to heighten tension, and players can only carry a limited amount of items at a time (which is mitigated by the item boxes scattered around the house). Item management and knowing when to flee are essential skills for finishing the game.

In true Capcom fashion, the original Resident Evil received numerous re-releases. The Sega Saturn and PC both received ports of the original game with some exclusive new content in 1997, while the PS1 received a revised edition titled Resident Evil: Director's Cut (which added a new difficulty setting with different item and enemy placements and came packaged with a playable demo of Resident Evil 2). Capcom released a third edition for the PS1 in 1998 (Resident Evil: Director's Cut: Dual Shock Edition) that added vibration and analog support for the DualShock controller as well as a different soundtrack. The Nintendo DS received its own version of the game in 2006 titled Resident Evil: Deadly Silence; this version added a Rebirth mode, numerous touch screen puzzles, and multiplayer game modes.

In 2002, Capcom produced a completely revamped version of the game for the Nintendo GameCube in an effort to bring the main series to Nintendo's new home console. This new version featured revamped character models set against full-motion backgrounds, CGI cut scenes (which replaced the cheesy live-action versions from the original), a brand new soundtrack, wholly redone (but still cheesy) voice acting, updated gameplay mechanics, and story line revisions that bring it in line with the sequels released up to that date. The remake was exclusive to Nintendo consoles for many years (it was re-released for the Wii in 2008) until Capcom announced an HD remaster of the game for the PlayStation, Xbox and PC platforms as a digital download. The PlayStation 3 and Xbox 360 versions were released in Japan in November 2014 (the former has an exclusive physical release in the region), while the PlayStation 4, Xbox One, and PC versions achieved complete global saturation alongside the overseas releases of the other versions in January 2015. Upgrades from the GameCube version include fully remastered graphics, the ability to switch between widescreen and "standard" screen sizes, an option to choose between the original's "tank controls" and a modern control scheme inspired by more recent entries in the franchise, and B.S.A.A. outfits for Chris and Jill. A Nintendo Switch version was released on May 21, 2019.

Along with the second entry in the series, Resident Evil: Welcome to Raccoon City uses this game as partial source material. It also has a Fan Game Prequel in the form of Resident Evil RE Visited.