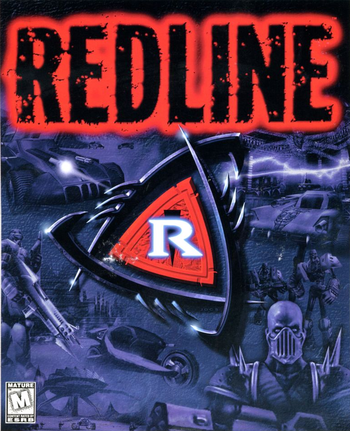 "Alright, that was those "Those Two Guys Who Live Behind The Gas Station" with Redline This, sure to be a number 1 hit here at Stadium City, since... no one else has any instruments! Ha ha, yeah."
— The DJ of KRIP Radio Station.
Advertisement:

Redline, known as Redline: Gang Warfare 2066 in Europe, is a Post-Apocalyptic First-Person Shooter developed by Beyond Games (a tiny developer which made only Atari games prior to this and only Hot Wheels: Velocity X afterwards) and released by Accolade for the PC in 1999, the last game they published before being acquired by Infogrames.

It's After the End. The moon's orbit has degraded to a point where it has affected the Earth's environment catastrophically, along with inexplicably turning the skies blood-red. The world is divided between the wealthy Insiders, who live in environmentally-sealed dome cities, and the destitute, scavenging Outsiders. Some Outsiders have formed marauding gangs who kill, terrorize and steal from the less aggressive types using Weaponized Cars. The largest and most deadly of these are the Red Sixers, called as such because of a disease called "Red 6" created by Negative Orgone Energy, which heightens their aggressiveness and strength but also gives them a taste for human flesh. It also makes them turn very, very red.

The Player takes the role of an unnamed, nondescript denizen of Stadium City, one of many Outsider settlements. The city has just come under attack by the Red Sixers. Citizens are in a panic, scrambling to escape the ravenous gang. The player must use their car to fight off the Sixers and escape from the city alive. Things get more complicated after that.

The game featured online multiplayer featuring a combination of on-foot First-Person Shooter gameplay and auto-combat in Third Person with a variety of armed vehicles. It was originally hosted on MPlayer.com and Heat.net, before being hosted by Gamespy Arcade.

This should not be confused with the 2010 anime movie Red Line.