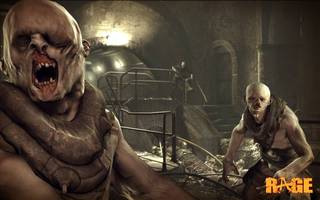 They were going to name it Apathy, but it just didn't test as well.
"Go for burial. Atlas control signing off. May we live to see another day."
— Atlas control, the opening cinematic
Advertisement:

A First-Person Shooter-slash-Driving Game hybrid by id Software, RAGE is based on the idTech 5 engine and set on Earth in the year 2135, over a hundred years after a collision with the real-life asteroid 99942 Apophis. The player is cast as a survivor who awakens from cryogenic preservation to explore a post-apocalyptic world populated by mutants and raiders.

Early gameplay videos focused on the vehicular combat aspect of the game, leading to speculation that id was Playing Against Type by releasing a non-FPS game. More recent information clarified that the game is primarily an FPS with significant racing, free-driving, and RPG elements. And yes, comparisons to Borderlands are inevitable.

It was released on October 4, 2011. After a year of inactivity, ID released a DLC for the game, Rage: The Scorchers, with new missions focused on battling the Scorcher clan, and the ability to continue playing past the game's ending. Has a 2019 sequel, Rage 2.