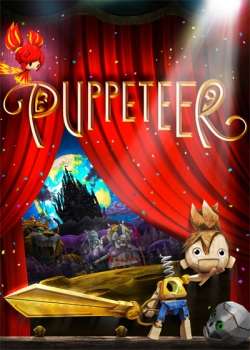 Not many people can perform a Yorrick soliloquy with their own head, but Kutaro is one of them.
"Welcome to the magical theatre, of the strange and fantastic..."
— Professor Gregorious T. Oswald
Advertisement:

Puppeteer is a side-scrolling platformer for the PlayStation 3. Puppeteer takes place in a magical puppet theatre, owned and run by the slightly eccentric but thoroughly charming Professor Gregorious T. Oswald. His latest production is the weirdly titled “The Perilous Journey of a Boy Named Kutaro.”

On one dark, moonlit night, the star of the show, a young boy named Kutaro, is carried away by the maleficent Moon Bear King to a black castle, where the unlucky lad is transformed into a puppet. Kutaro then displeases the terrible tyrant, who duly devours the boy’s wooden head and casts away his body. But the headless hero is not alone, for he discovers a very special pair of magic scissors, which will help him on his harrowing quest to find his head -— and his way home.

Unlike most games where you move through the world, the world of Puppeteer actually moves around you, with all the action taking place on the same stage. The sets are continually moving and changing, taking you on an adventure with surprises in every scene.