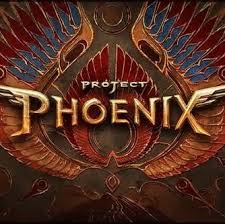 An possibly upcoming JRPG with a squad based RTS game design, Project Phoenix is being developed by Creative Intelligent Arts Inc. The project was put forth

on Kickstarter on August 12th, 2013 and got fully funded on the same day, finishing a month later with just over $1M raised. It then demonstrated a short demo

in 2014, but since then, it appears to be delayed indefinitely

Azuregard is a world that is slowly slipping into chaos. The Empire's power is being threatened both by orc raiders and human outcasts, while the elves look to the stars to predict what lies ahead of the troubled times. Marcus Stern, a Templar, finds the amnesiac angel "Ruffles," and sets out on a quest. They are quickly joined by the elven Pathfinder Sylrianah and the human battlemage known as Zarum the Lost. Together, they must discover the secrets of their world.