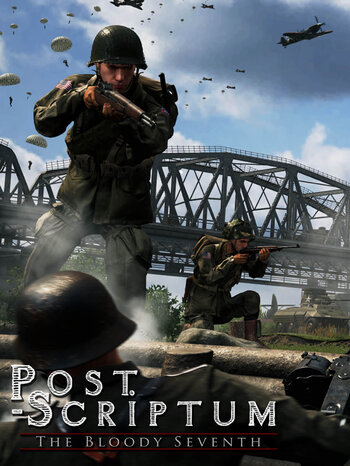 Post Scriptum is a tactical First-Person Shooter developed by Periscope Games and published by Offworld Industries, the developers and publishers of Squad. Originally developed as a mod for the former game, Post Scriptum was eventually made into a standalone title after Periscope Games was made into an official development company. It was released on August 10, 2018 on Steam, on Microsoft Windows.

Set during World War II, specifically the War in Europe and Africa's Western Front, the game is divided into four main campaigns, each released per chapter. The first chapter, "The Bloody Seventh", focuses on Operation Market-Garden in the Netherlands, with British, American, and German forces introduced. The second chapter, "Plan Jaune", adds the French Army, with its maps set during the Battle and Fall of France to the Germans. The third, "Day of Days", adds the Battle of Normandy, introducing new American infantry uniforms. The fourth, and most recent, chapter, "Watch on the Rhine", was released on September 14th, 2022, adding a new winter map Foy, plus a number of new vehicles and uniforms for the American and German factions.