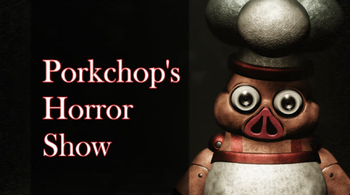 Porkchop’s Horror Show is an Un-Cancelled Five Nights at Freddy's fangame created by Phisnom, who also created Porkchop’s Adventure and A Shadow Over Freddy’s (the former of which is a teaser for this game). The game will integrate the traditional sit-n-survive gameplay of the series with point-and-click adventure gameplay. The premise is that you are a lucky contestant in a horror themed game show, in which you must navigate a haunted meat factory and solve high-stakes puzzles, lest a certain animatronic pig catch you and bring your quest for money and fame to a horrifying conclusion. The game will go through three “seasons”, each featuring a more horrifying incarnation of Porkchop than the last, with plenty of post-game content afterwards.