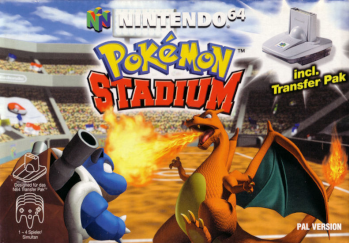 "AND THERE GOES THE BATTLE!"
— Announcer, Pokémon Stadium
Advertisement:

A series of battle simulation Spin-Off console games in the Pokémon series, created with the purpose of allowing players to see creatures from the games duke it out with 3D models, rather than the 2D sprites of the mainline portable consoles games. As such, you're expected to play each title by uploading and battling with Pokémon they've caught in their corresponding series. However, each entry also has "rental" Pokémon available to use instead, if you don't own the necessary game, are unable to connect it, or playing it on the Nintendo Switch Online (when it comes to the first two games).

As detailed below, the series consists of threenote four, if you count the Japan-only Stadium entry titles: the Stadium games on the Nintendo 64, developed by HAL Laboratory to correspond with the first two generations of mainline Pokémon games, and a Wii installment entitled Pokémon Battle Revolution, developed by Genius Sonority to correspond with the fourth generation. The closest equivalent to these games during the third generation were the Nintendo GameCube Colosseum duology titles, which while having battle simulation side modes, are principally console JRPGs that are detailed on their respective pages.

Pokémon Battle Revolution ultimately ended up being the final game in the series. Generation V completely lacked any kind of Stadium title, while the following generation had the main series finally make the Video Game 3D Leap. As for storage, subscription-service applications such as Pokémon Bank (for Nintendo 3DS), and Pokémon HOME (for Nintendo Switch and smartphones) would take up that role. With both main functions of the Stadium series now covered by the mainline installments and other applications (especially once Pokémon Sword and Shield entered the picture), Game Freak's Junichi Masuda has stated that

they would need a new idea to justify returning to the sub-series.

Games in the series
Generation I (Nintendo 64)

The announcer has unique chatter for the following: