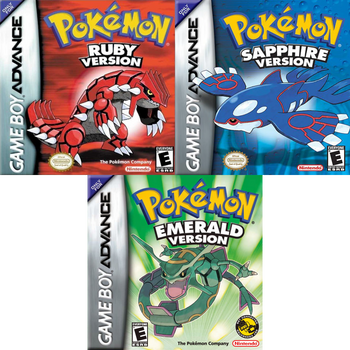 The games took place in Hoenn, which is based on the Kyushu region of Japan rotated ninety degrees counterclockwisenote Of course, since the world is round and we never see Hoenn on a map along with any other regions, this rotation doesn't matter much. The game begins with the player moving to their new home in Littleroot Town, and later saving the local Pokémon Professor, Birch, from a wild Pokémon. As thanks, he gives the player their own Pokémon, encouraging him/her to travel around the region and collect as much data on Hoenn's Pokémon as they can, much like Birch's child (and your rival) Brendan/May is doing.note Your rival is whichever player character you didn't pick at the beginning; if playing as May, Brendan is your rival, and vice versa.

These games may be the biggest case of One Game for the Price of Two in the franchise, as there is no way to legitimately collect all 386 Pokémon without aid from FireRed, LeafGreen, Colosseum, and XD (and oddly, only Ruby or Sapphire, because Emerald has whatever Pokémon the other version lacks).note The Game Boy Advance had backwards-compatibility for the Game Boy Color, but its link cables were unable to connect the two systems; coupled with the aforementioned data structure redesign, there was no method for importing or trading Pokémon from Gold, Silver or Crystal to Ruby, Sapphire or Emerald. The Red and Blue remakes provided all 150 Kanto Pokémon and a small pool of Johto's, with Colosseum and XD having several from all three regions; together, they had all but the event-only Pokémon. Perhaps not coincidentally, it was during this generation that Nintendo stopped using "Gotta Catch 'Em All" as the franchise's slogan. Speaking of generations, the next one, Gen IV, starts with Pokémon Diamond and Pearl.

On May 7, 2014, The Pokémon Company announced remakes for the Nintendo 3DS, titled Pokémon Omega Ruby and Alpha Sapphire. Prior to their release, players could download a special demo version starting in mid-October 2014, which centered on Mossdeep Island. The games were released in November 2014 (Nov. 21 in most places, Nov. 28 in Europe), exactly twelve years after the originals' release in Japan. Groudon and Kyogre have newly-introduced "primal" formsnote they have more intricate Tron Lines and prominent "omega" and "alpha" designs on their hands, respectively, and these lines now glow yellow and turquoise instead of blue and red, on top of straight-up glowing panels on their bodies, which are depicted on the boxart, other Pokémon get Mega Evolutions, lots of features were added or upgraded, and a post-league scenario known as the Delta Episode was included. These games are part of the "Sixth Generation" of Pokémon games and are compatible with Pokémon X and Y.