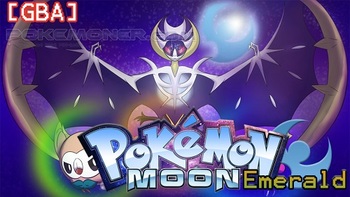 Pokemon Moon Emerald is a video game created in 2016. It's a ROM hack of Pokémon Emerald that adds all the Pokemon from games up to Pokémon Sun and Moon. It essentially plays the same as the game it's based on, except you get Alola starters, other trainers have more varied teams and the challenge is slightly higher. There's also a version available that raises the shiny encounter rate to 1%.